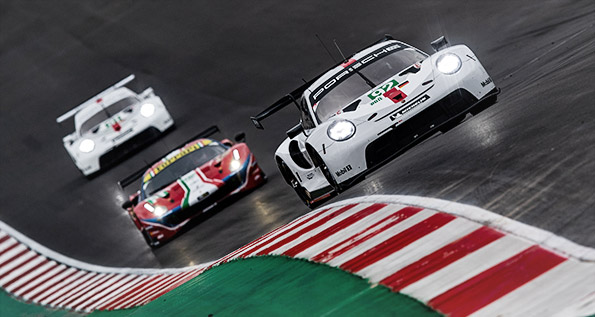 Stuttgart. After a fiercely-contested race at the Sports Car World Endurance Championship WEC in the USA, celebrated its fourth podium result of the season. The reigning champions Kévin Estre (France) and Michael Christensen (Denmark) concluded the six-hour race in Austin on second place in the GTE-Pro class. At the wheel of their 911 RSR, which is based on the high-performance 911 GT3 RS road-legal sports car, the pair were just 4.210 seconds off claiming victory after 173 laps without a single yellow phase. Their teammates Gianmaria Bruni (Italy) and Richard Lietz (Austria), however, were unlucky. A technical problem threw the No. 91 911 RSR three places down the field, with the pair ultimately taking the flag in seventh place in the GTE-Pro class. In the manufacturers’ classification, retains second place. In the GTE-Am class, Matteo Cairoli (Italy), Egidio Perfetti (Norway) and Germany’s Laurents Hörr clinched third place in the 2017-spec Porche 911 RSR fielded by the Project 1 squad.

Round five of the WEC in Austin was characterised by different tyre strategies and many duels. Under cloudy skies and in temperatures of around 20 degrees Celsius, spectators were treated to a six-hour sprint event without a single safety car phase on the Circuit of the Americas (COTA). Taking up the race from the second grid spot, Estre and Christensen put in a spirited and flawless drive and were rewarded with second place. However, the race for the Silverstone winners Bruni and Lietz proved disappointing. While running in fourth place, Bruni suddenly found he could not change gears and rolled to the edge of the track. After resetting the electrical system, the gear shifting worked again. Still, to be on the safe side, the team replaced the battery at the next pit stop. The lost time relegated the 911 RSR back to seventh place in the GTE-Pro class.

Comments on the race

Alexander Stehlig (Head of Operations FIA WEC): “I have mixed feelings about this round. The number 92 car had a very good race, which resulted in a commendable second place. Unfortunately we experienced an electrical problem with our number 91 911 RSR. The car stood at the side of the track and we had to change the battery. That cost us several positions and consequently many championship points.”

Kévin Estre ( 911 RSR #92): “In terms of tyre choice, we chose a different strategy than most of our competitors today. We raced on used slicks for most of the time while our rivals ran new tyres and vice versa. That’s why we were sometimes ahead and sometimes behind. But we didn’t let that faze us and we simply focussed on the job at hand. Unfortunately, it wasn’t quite enough to win and we were only four seconds off, but second place yields us important points for the championship.”

Michael Christensen ( 911 RSR #92): “We got the best out of the car. The team did a flawless job and we drove a steady race. I hope we’ll be at the top of the podium again next time.”

Gianmaria Bruni ( 911 RSR #91): “Unfortunately, technology threw a spanner in the works today. It’s a real shame, especially so close to the end of the race. Still, the new 911 RSR is in its maiden season. We had the speed and the strategy to reach the podium today. We’ll do our utmost to be up the front again at the next race.”

Richard Lietz ( 911 RSR #91): “The car ran well right from the start. Our rivals were able to pull clear a little on the straights, but we caught up on the narrow, technically demanding passages. The balance of our 911 RSR was excellent. The tyres still looked great after a double stint, and our strategy was perfect. Unfortunately we were hampered by the electrics. But Kevin and Michael’s good result demonstrate that the car has a lot of potential.”

Egidio Perfetti ( 911 RSR #56): “Basically the race went really well. We definitely could have implemented a different strategy to finish even further up the field, but third place with our new driver line-up is very good and I’m happy with it.”

The consumption and CO2 emission values were determined in accordance with the new World-wide Harmonized Light Vehicle Test Procedure (WLTP). The NEDC values derived from this should continue to be specified for the time being. These values cannot be compared to the values de-termined in accordance with the NEDC measuring procedure used up to now.

All reports on the previous season can be found in our archive.