On the Trail of Tradition

The numerical progression in their names is not a coincidence—the 918 Spyder and the 919 Hybrid have a lot in common. The high-end road-going sports car heads out onto the terrain of the LMP1 racing car for a foretaste of the 24-hour race in Le Mans with factory driver Marc Lieb.

On the Autoroute de l’Est, somewhere between Alsace and Champagne, a blue police car suddenly appears in the left rearview mirror. Marc Lieb glances at the speedo­meter—130 km/h—he’s driving right at the speed limit for this part of the French freeway system. But the patrol car doesn’t overtake him. Instead, it keeps driving next to him at precisely the same speed. We make eye contact with the two policemen. They gaze eagerly at the red and white 918 Spyder with its black carbon rear wing. The officer at the wheel smiles and gives a thumbs-up of approval. His colleague holds up a smartphone and takes a souvenir photo of the super sports car. The factory driver smiles and waves in return. It is a rare moment when he is happy to let someone pass him.

Lieb set off two hours ago from Stuttgart-Zuffenhausen. Before reaching the border with France, there was a short stretch on the German freeway where he could accel­erate entirely legally up to 283 km/h. But even though the speed limit is much lower here, his blue eyes are sparkling. It’s not every day that one can trigger such positive emotions, even for a professional race-car driver. Today’s drive is in itself something special for Lieb, an advance visit to a place of great professional significance. In June he will be contending for top honors in the LMP1 class at the 24 Hours of Le Mans as a factory driver of the newly developed 919 Hybrid. The LMP1 class is the highest category in which the major carmakers and their prototypes compete for overall victory. is returning for the first time in 16 years.

Lieb is 33 years old. Without his helmet, HANS (Head and Neck Support), and regulation racing suit, he weighs 72 kilos. The fine features on his slender face and, for that matter, the man himself do not match the stereotype of a macho race-car driver. He is also a engineer who was involved in the development of the 919 Hybrid for three years. “Everything has to be set up so it works for all of the drivers,” he notes. Three drivers will split the duties for each car over the course of the 24-hour race. For the steering wheel, for example, they have to agree on which toggle switches and buttons will be positioned in which locations on the central panel. That’s all clear in the cockpit he’s sitting in at the moment. And he operates it with the assurance of a concert pianist.

The 918 Spyder is the road-going car that is closest to the 919 Hybrid. Its hybrid drive, which consists of a combustion engine plus one electric motor each on the front and rear axles, has an overall output of 652 kW (887 hp) and a peak speed of 345 km/h. Its seat is nearly as low as that in the racing car, and this drive to Le Mans adds a new meaning to the term “sports car.” At every toll station, Lieb has to remove his seat belt, heave himself up from the bucket seat, and stretch his upper body up through the side window—which is the only way to reach the slot for the credit card. The height at which conventional cars have their side mirrors is where the 918 Spyder has a removable carbon top. 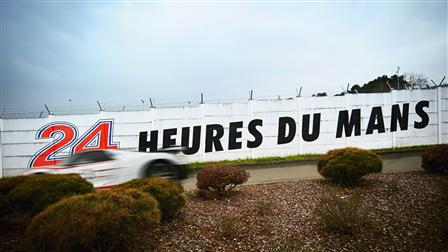 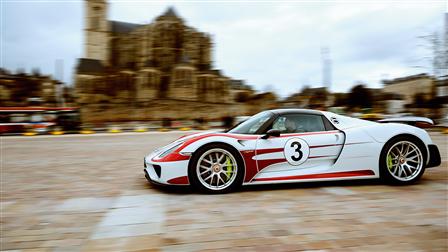 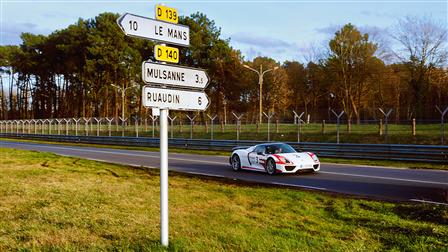 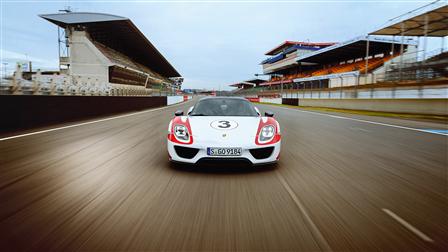 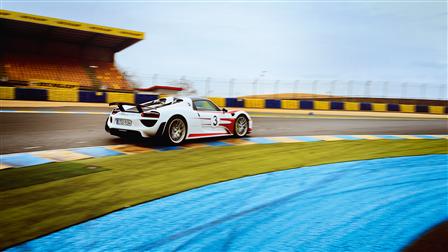 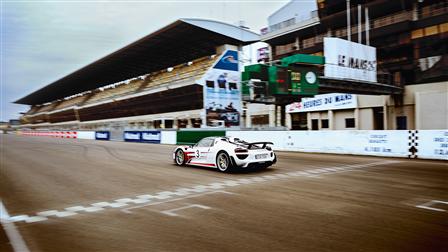 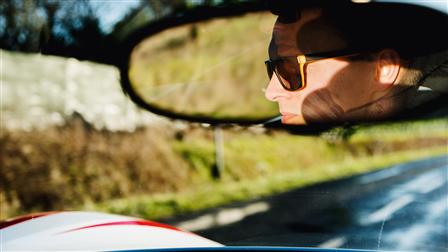 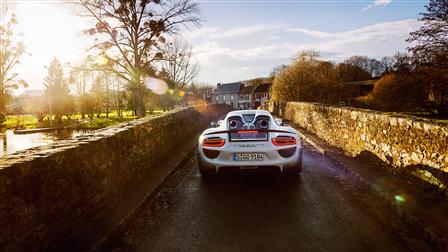 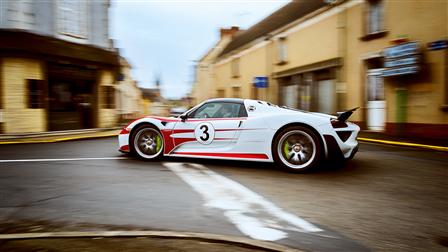 There are quite a few toll stations along the way to Le Mans. The city is located 200 kilometers to the southwest of Paris. It has 143,000 inhabitants, an old cathedral, and a new station for high-speed TGV trains (train à grande vitesse). If it didn’t have such a reputation for racing, this provincial city would hardly be known outside France. But it is here the world’s first Grand Prix was held back in 1906. And here the 24-hour race has started on a Saturday afternoon, every June, since 1923.

Once we arrive in Le Mans, Lieb immediately sets off in search of the Circuit des 24 Heures. To this day, most of the course is made up of public roads. In its present version one lap measures 13.6 kilometers. After the start we go under the Dunlop bridge, then past the bar at the Tertre Rouge, which is where the legendary Mulsanne straight begins. It leads to the village of Mulsanne. Race-car drivers hold this part of the course in awe.

The impressive part of this straight is that it runs for nearly five kilometers through flat landscape. There’s a fast-food place to the right, then a furniture store advertising armchairs with the brand name “Stressless.” Lieb carefully overtakes a mountain biker returning from his workout in a mud-spattered jersey. Mobility has many faces in the forests around this racecourse.

Triple-level crash barriers are the only sign that this country road running between woods and fields is a racecourse. And Lieb’s tone of voice. Over the 820 kilometers from Stuttgart to Le Mans he answered all questions in a friendly and knowledgeable manner. When his passenger wasn’t quizzing him, the only sound was the eight-cylinder engine under the top pipes, whose acoustics resemble those of a racing car.

Lieb is consummately at ease behind the wheel; he talks casually about the benefits of the Spyder and comments on the surroundings that evoke the opening scenes of the famous Le Mans movie starring Steve McQueen. But as soon as we reach the Mulsanne straight, this sober engineer turns into a passionate race-car driver. Now the stories come thick and fast, and the road becomes a river of emotion.

The interview proceeds at racing speed, and the reporter can hardly record his notes fast enough. At the first chicane: “At night you won’t find your braking point on the road—you have to use the road signs for orientation.” “Happy hour” is when the sun comes up on Sunday morning. “The asphalt and the air are still cool from the night,” he says, “but you can see everything again and your lap times are one or two seconds faster.” As we exit the chicane he demonstrates one of the advantages of the hybrid system: the 95 kW (129 hp) electric motor on the front axle turns the 918 Spyder into a vehicle with all-wheel drive. “The car is more stable, and I can accelerate considerably faster out of curves,” he notes.

Now we head into the Mulsanne curve. In the race Lieb will be braking brutally from more than 300 km/h down to 70. This is one of the most spectacular repeat maneuvers of this classic endurance race, especially at night. As far as the hybrid racing car is concerned, braking doesn’t just mean decelerating. The mechanical energy produced in the process is converted to electrical energy and fed into the battery: pure efficiency.

Right before the final stretch we come to the curves. Lieb is especially fond of this combination. “Fifth gear—they’re some of the fastest curves ever, so you’ve got to have guts.” But it wouldn’t do to be reckless. Sports-car drivers are well aware that “you can’t win Le Mans in a single lap. But you can lose the race in a single curve.”

Tires are stacked amid the bright yellow flowers of the broom bushes. Poplar and birch trees line the road. A flea market has been set up on a field. During the race there won’t be anything here except the tents and trailers of racing fans from around the world. Le Mans is a real-life contrast to the sterile Formula One racetracks that were designed on a computer screen somewhere. Genuine provincial life forms the backdrop for the racing cars of the prototype class.

For example, there is Teloché, a village to the south of the course. Its town hall is just one story high, and down the road two gas pumps stand in front of a small mechanic’s workshop with a sign that reads “Repair service for all makes.” A poster in one of the windows adver­tises a small-town discotheque. A car on the lift platform is getting new brake linings. V-belts and Bowden cables hang from the walls.

When entered Le Mans for the first time in 1951, its mechanics prepared the cars for the race at this very workshop. That was true in 1970, as well, when Hans Herrmann and Richard Attwood took the first overall victory in a short-tail 917. first moved into the pit lane on the final stretch in 1981. The owner of the workshop is too down-to-earth to open a museum. No souvenirs or slogans draw attention to this chapter of racing history. But Madame Sergent, who sits behind the cash register in the office, pulls an album from a cupboard and proudly shows us photos: Jacky Ickx surrounded by mechanics; the 356 from 1951 with a radiator hood held down by two leather straps.

This little workshop shows that is inextricably linked with Le Mans. Even after the company left the LMP1 category in 1998—the year of its last overall victory to date—people still come by to ask about the workshop, says Madame Sergent.

Would Marc Lieb be so kind as to pose for a photo with the 918 Spyder? “Bien sûr,” he replies. All of a sudden a little crowd has gathered, and smartphones are pulled out to record the moment as Lieb drives up in E-mode. The super sports car moves as silently as a bicycle. The only sound you hear is that of the tires rolling on the ground, and a few pebbles thrown up against the underbody. “What’s the range of the electric motor?” asks a mechanic. “Thirty kilometers,” says Lieb. “How fast can it go on electric power?” “150 kilometers an hour.” Once again, the car evokes natural curiosity and pleasure.

Le Mans brings the history of racing to life. Lieb himself is part of this grand tradition, because he won the GT class here. At the end of our tour he returns to the stretch that is both start and finish, stops the 918 Spyder in the starting position, and climbs out of the car. He leans against the driver’s door and gazes ahead. On June 14 he’ll be driving here in the 919 Hybrid. For the first time, he’ll be one of the drivers competing for overall victory.

History is already awaiting him.